What are the Health Benefits of Vitamin K2?

This blog has not been approved by your local health department and is not intended to provide diagnosis, treatment, or medical advice. 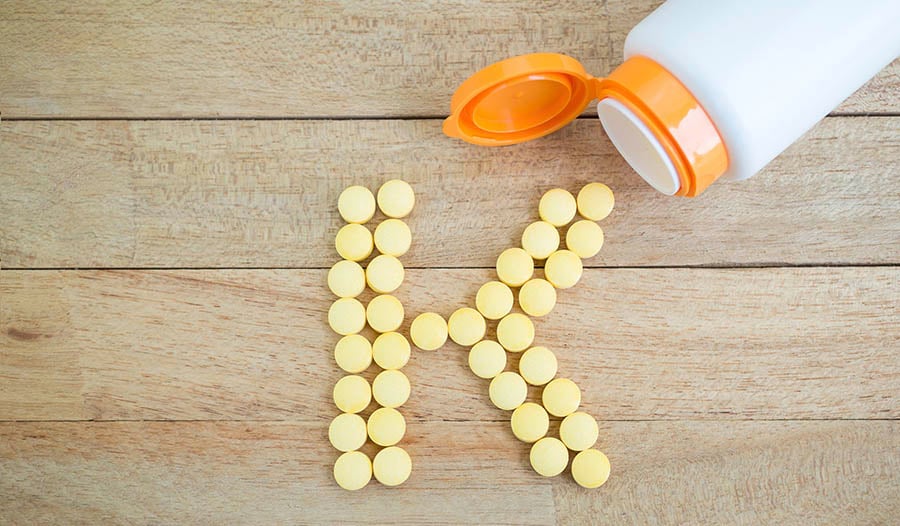 Just as there has been an explosion of positive science on the importance of vitamin D3, another nutrient, vitamin K, is showing tremendous promise in the treatment of a wide range of health conditions. In fact, since most people are not getting anywhere near the level of vitamin K in their diet, it is one nutrient that you simply need to learn more about.

Vitamin K as a Supplement

The importance of vitamin K supplementation has been known for a long time. Case in point is that since 1961, vitamin K1 injection has been given to all newborn babies to prevent hemorrhagic disease of the newborn. This condition occurs because of a lack of vitamin K. When a baby is born the intestinal tract is sterile. Since a major source of vitamin K (in the form of K2) is synthesized from gut bacteria and most women do not have high concentrations of vitamin K in their breast milk, the baby must rely on the amount of vitamin K delivered through the placenta before birth until the gut microflora gets established.

It now appears that it is not just newborns that can benefit from vitamin K supplementation as new clinical data shows tremendous benefits in the prevention and treatment of osteoporosis, rheumatoid arthritis, and heart disease.

Vitamin K is a fat-soluble vitamin that is most famous for its role is in the manufacture of clotting factors. However, recent studies have shown that vitamin K is also necessary for building healthy bones and may play a role in treating and preventing osteoporosis.

There are several forms of vitamin K designated as K1, K2, and K3. The first form, K1 or phylloquinone is derived from plant sources. K2 or menaquinone is produced by bacteria and found in some fermented foods. There are several different forms of K2 based upon the number of molecules known as isoprenoids that are attached to the menaquinone backbone. MK-7 is the most important commercial form of vitamin K2. It contains seven isoprenoid residues attached to menaquinone. K3 is a synthetic form.

Vitamin K is often neglected as a vitamin because the conventional wisdom is that deficiency is thought to be quite rare because there are good dietary sources of K1 and gut bacteria can produce K2. Rich sources of vitamin K1 are dark green leafy vegetables, broccoli, lettuce, cabbage, spinach, and green tea. Good sources are asparagus, oats, whole wheat, and fresh green peas. MK-7 is found in high concentrations in natto (a fermented soy food popular in Japan). A three-ounce serving of natto provides 850 mcg of MK7.

Vitamin K plays an important role in bone health as it is responsible for converting the bone protein osteocalcin from its inactive form to its active form. Osteocalcin is the major non-collagen protein found in our bones that anchors calcium into place within the bone. Low intake of vitamin K1 is linked to osteoporosis and hip fractures. Since vitamin K1 is found in green leafy vegetables, it may be one of the protective factors of a vegetarian diet against osteoporosis.

Various forms of vitamin K supplements have been used in human trials examining its effects on bone health: vitamin K1 (phylloquinone), menaquinone-4 (MK-4, a form of K2) and menaquinone-7 (MK-7). The results with these first two vitamin K supplements (K1 and MK-4) are much different than those achieved with MK-7. Most of the double-blind studies with vitamin K1 have shown only modest or mainly no effect on bone density and while studies with MK4 have shown positive results in reducing bone loss and fracture rates, the dosage used (45 mg/day) was well beyond a nutritional effect and more likely the positive results are due to a drug-like effect at such high dosages.

MK-7 has been found to be more potent and more bioavailable as well as to have a longer half-life than MK-4. MK-7 is also more effective than K1 in activating osteocalcin and stays in the blood circulation much longer.

In a landmark major clinical published in the March 23, 2013 issue of Osteoporosis International, MK7 . 2013 Mar 23, MK-7 supplementation at relatively low dosage levels (180 mcg per day) produced tremendous effects on improving bone health. In the study, 244 healthy postmenopausal women took either the MK-7 or a placebo for 3 years. Bone mineral density of lumbar spine, total hip, and femoral neck was measured by DXA; bone strength measures of the femoral neck were also calculated. Vertebral fracture assessment was performed by DXA and used as measure for vertebral fractures. Measurements occurred at baseline and after 1, 2, and 3 years of treatment.

MK-7 intake significantly improved vitamin K status and active osteocalcin levels, and decreased the age-related decline in bone mineral concentration (BMC) and BMD at the lumbar spine and femoral neck. It did not increase either measure at the total hip. Bone strength was also favorably affected by MK-7 – a key determinant of fracture risk. Lastly, MK-7 significantly decreased the loss in vertebral height of the lower thoracic region at the mid-site of the vertebrae. These results highlight the importance of MK-7 supplementation in postmenopausal women.

Rheumatoid arthritis (RA) is a chronic inflammatory condition that affects the entire body, but especially the joints. There is abundant evidence that RA is an autoimmune reaction, in which antibodies develop against components of joint tissues, but what exactly triggers this autoimmune reaction has centered on genetic factors, abnormal bowel permeability, lifestyle and nutritional factors, food allergies, and microorganisms. RA is a classic example of a multifactorial disease, wherein an assortment of genetic, dietary, and environmental factors contribute to this disease.

Based upon preclinical studies showing another form of vitamin K2 (MK-4) blocked the development of arthritis in the experimental animal model of RA, it was suggested that MK-4 might offer benefit in human RA. Human studies following and it was shown MK-4 supplementation reduced RA disease activity associated with a marked decrease in clinical and biochemical markers. However, since MK-7 has greater bioavailability than MK-4 after oral administration, researchers were quite curious if even better results might be produced with this form.

To clarify the therapeutic role of MK-7 added to a normal therapeutic regimen of RA in patients with different stages of the disease, 84 RA patients (24 male, 60 female) (average age=47.2 years) were enrolled in a randomized clinical trial. The patients were divided into MK-7 treated group (n=42) and a control group (n=42). MK-7 capsules were administered in a dose of 100 mcg/day for three months in the first group without changing other medications.

To assess the benefits with MK-7, the clinical and biochemical markers on RA patients treated with MK-7 and the control group were assessed before and after three months. The results showed a statistically significant decrease in MK-7 treated group for the levels of the following markers of inflammation: erythrocyte sedimentation rate (ESR), RA disease activity score assessing 28 joints, C-reactive protein (CRP) and matrix metalloproteinase (MMP-3). In addition, MK-7 also increased the level of the active form of osteocalcin, an important marker of bone health. The benefits noted with MK-7 were directly related to increased levels of MK-7 in the blood.

The authors’ conclusion was, “MK-7 represents a new promising agent for RA in combination therapy with other disease-modifying antirheumatic drugs.”

Just as the popularity of vitamin D3 increased in health food stores after an explosion of positive scientific investigations, it appears that there is a similar phenomenon occurring with vitamin K, specifically MK-7. It is important for health food store retailers to understand the different forms of vitamin K and the effective dosage ranges used in clinical studies. For osteoporosis, the general recommendation is 180 mcg of MK-7 per day. For RA, the dosage used in the clinical trial was 100 mcg of MK-7 per day. For general health, most experts recommend an intake of 80-120 mcg of vitamin K1 or K2.

Obviously, in patients on anticoagulant therapy with warfarin (Coumadin), vitamin K supplementation is contraindicated. Otherwise, there are no other known issues with taking vitamin K1 or MK-7 at recommended dosage levels.

9 Health Benefits of Vitamin B12

Vitamin B12 (also referred to as cobalamin or cyanocobalamin) is an important nutrient that your body requires to help optimize brain, nerve, and blood health. However, despite its importance, there's plenty of evidence showing that people around the world are deficient in this essential nutrient.

Vitamin K is important for bone health, blood health, and cardiovascular function. A naturopathic doctor explains how to get more of it into your diet, safely.

Vitamin D is necessary for health and disease prevention

If there is one vitamin in the world that can help optimize a person’s health and well-being, it’s vitamin D (also known as vitamin D3 or cholecalciferol). Traditionally, vitamin D deficiency was associated with the bone disease rickets, but since the disease is now rare, many assume vitamin D deficiencies do not exist. Nothing could be farther from the truth!